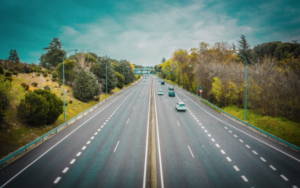 The Federal Highway Administration (FHWA) has officially approved a new round of highway designations for several stretches of Indiana highways. These designations are a part of round three, in a national designation process administered by the FHWA and are designed to prepare national highways for alternative fuel vehicle usage.

Greater Indiana Clean Cities collaborated with the Indiana Department of Transportation, the Office of Energy Development, and numerous metropolitan planning organizations to support a proposal submitted at the beginning of 2019. The collaborative proposal led to parts of I-65, I-465, I-74, and I-94 to be designated as Ready or Pending for Electric Vehicle (EV), Compressed Natural Gas (CNG), or Liquefied Petroleum Gas (LPG/Propane). Once an interstate is designated as “Ready” for an alternative fuel, signage can be placed by the interstate marking the designation and informing drivers of their fueling options.

Greater Indiana also collaborated with Greater Lansing Clean Cities, Michigan’s Department of Transportation, the Indiana Department of Transportation, and received support from various metropolitan planning organizations on the designation of alternative fuels for Interstate 69. The stretch of highway receiving designations runs from Port Huron, Michigan all the way to Evansville, Indiana, covering 546 miles. The designations are for propane, compressed natural gas, and electricity.

In addition to Indiana’s submittal and the collaborative I-69 proposal, Greater Indiana was also a partner in the multi-state application for Interstate 70. This proposal covered the states of Illinois, Maryland, Pennsylvania, West Virginia, Ohio, Indiana, Missouri, and Kansas. The fuel designations for this proposal included EV, CNG, LNG, and LPG. Various state departments of transportation served as key partners in this effort, leading to a successful outcome.

“Greater Indiana will continue its work on Alternative Fuel Corridors for the state of Indiana,” stated Kerri Garvin, Executive Director for Greater Indiana. “Preparing our interstates and equipping drivers with a choice of alternative fuels, benefits our economy and improves air quality. The partnerships we built throughout the proposal process for all the interstates will lead to continued collaboration, to ensure any driver in Indiana has the opportunity to use an alternative fuel,” said Garvin.

Rounds one to three of the FHWA’s Alternative Fuel Corridor Designations included 79 nominations, which comprised over one hundred interstates, as well as seventy-six US highways and state roads. There are forty-six states plus D.C. currently included in these designations. For specific information about each interstate designation, please visit the table located on the FHWA webpage, which contains Indiana’s designations.